Stefane Goldman was born in 1975 in Sao Paulo. A complete guitarist with multiple influences, he is as comfortable playing acoustic as electric – he knows how to be subtle but can make the amps roar. He is also a composer, producer and arranger. His musical career has allowed him to multiply his experiences both in the studio and on stage with artists as diverse as Alexkid, Max Cavalera, Imany, Flow, Jil Caplan, Liset Alea, as well as the group Dubphonic which he co-founded. He is actively working on his solo project under the name of Goldmoon, whose title Bells (published on the Lumière Noire label) is the subject of a cover version by pianist Alban Claudin released as a single on January 21, 2022 (Sony Masterworks).

“I quickly felt unsuited to school and threw myself headlong into learning music, as a self-taught. It is the same passion for music that brings together, in the early 90s, a small circle of friends, some of whom will have a decisive influence on my future. Among them, Alexis Mauri aka Alexkid, Ben Mosca with whom we will create Dubphonic, Edo Sellier who will become a key character of the trio Blond and Blond and Blond…“

As a guitarist, Stefane Goldman participated in many recording sessions (studios de la Seine, Davout, Gang, Question De Son…). It is at Taklab that he became familiar with sound recording and production software such as Pro-Tools and Ableton. A learning essential to work efficiently in pre-production or in the production of projects for which his knowledge is a precious asset.

“After hours spent making rudimentary models in our teenage bedrooms, it is in the Taktic Music studio that we will be able to create, experiment, make all the possible and impossible mistakes, learn to record, use a mixing console, multi-tracks and effects… Taktic Music which, as we become professional, will become the publisher of our works.”

It is with Kangourou, a semi-professional rock band that he joined at the age of 17, that Stefane Goldman will have his first experience of life on the road during a tour in Portugal. This was followed by countless acoustic concerts in bars, clubs and private parties. At the same time he will be regularly on stage with developing artists. With time the concerts will become more and more important, the public more numerous, from Dubphonic to Flow, from Jil Caplan to Imany.

“In the beginning, you carry your own amp, guitars and effects pedals. We travel in our own car when we have one, or in a vaguely fitted out truck. One day the truck becomes a 9 seats van. Which, at best, one day becomes a tour-bus capable of accommodating about fifteen people.
The public at the beginning is that of faithful friends, who brave the cold and the snow to see us play in the most distant places of the Parisian suburbs. It is also the one of the regulars of the bars, passionate they often listen to us to the precise note, while others take us for juke boxes. One day, in the middle of a sound check, we realize that we are in a real big hall, and the concerts follow one another, Olympia, Zeniths, festivals where the public is so numerous that we don’t see the end.
From the beginning until today the experience of the stage is one of exchange, of sharing, it is unique… orgasmic!”

If writing alone is not always obvious, co-writing is a different story. It requires concentration and discipline, the ability to seize inspiration at a moment’s notice and to give up on an idea when the partner in creation does not find it as strong as one thought. It is of course a dialogue, but also a path that is not without evoking the role of a midwife helping a child to come into the world. In this sense, Stefane Goldman has created a reputation as a “midwife” of songs with artists from very diverse musical backgrounds. And it is naturally that he finds himself involved in co-writing.

“Composing… Even before I could really play! As a student, I remember melodies, phrases, or ideas catching my attention. Like many musicians, I learned my instrument by slaving over covers of my favorite artists, but my first attempts at composition were always more creative than technical. And over the years, I’ve found myself more and more frequently surrounded by other creators, ready to experience working together, ready to stop time to make songs happen.”

1997 – First recording sessions with French electronic music artist Alexkid for the F Communication label. Guitarist on several of his EPs and two albums “Bienvenida” and “Mint”. As well as many of his remixes, including the remix of “Shoot the dog” for George Michael.

2000 – Participation in the album “Surviving the day” of Muriel Moreno (Ex Niagara).

2003 – Composed, recorded and co-produced “Smoke signals” Dubphonic’s first album including their remix of Tosca’s Orozco. The track “Babylon Insight” will illustrate a scene from the American series Dexter…five years later!

2005 – Meeting with Max Cavalera (ex-Sepultura) for an acoustic duet on Oui FM, followed by a collaboration on the track ‘Soulfly V‘ for the album “Dark Ages

Recording with Llorca, remix of Emballa for Cirque du soleil

2006 – French tour with Jil Caplan for the tour of his album “derrière la porte”.

2007 – Meets the singer Flow with whom he will work regularly until 2015. On guitars on three albums, including two as co-producer and some songs signed in common. In concert at the four corners of the hexagon, and in first parts of Yannick Noah, Trio, Yves Jamait, La Rue Ketanou, Ours…

2009 – Dubphonic comes back with “Relight”, result of many hours of studio work. A dithyrambic press including 4 keys Télérama and a surprising range of guests of mark with the song, the keyboards. French tour.

2010 – Beginning of a long and fruitful collaboration with Imany: Stefane Goldman is present on 4 albums including a live album and the soundtrack of the movie “Sous les jupes des filles” as a guitarist and co-composer of several songs. Platinum record for the two studio albums, diamond single for ‘Don’t be so Shy’, one of his co-compositions which will be in the top 5 of about fifteen countries. Two incredible international tours, TV shows (Taratata, Vivement dimanche, Les Victoires de la Musique…). A complicity which, ten years later, gives birth to “Voodoo Cello” for which Stefane is responsible for the pre-production.

2010 / 2019 – In parallel to Imany, Stefane records for Liset Alea, Sir Samuel (ex Saian Supa Crew), Musset (ex-Revolver) either as a guitarist or as a producer, sometimes both.

2019 – Creation of the entity Goldmoon, solo project. Release in 2020 of a first track “Bells”, in the compilation “From above Vol2” on Chloé’s label Lumière Noire. 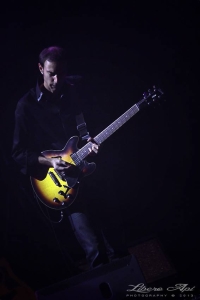